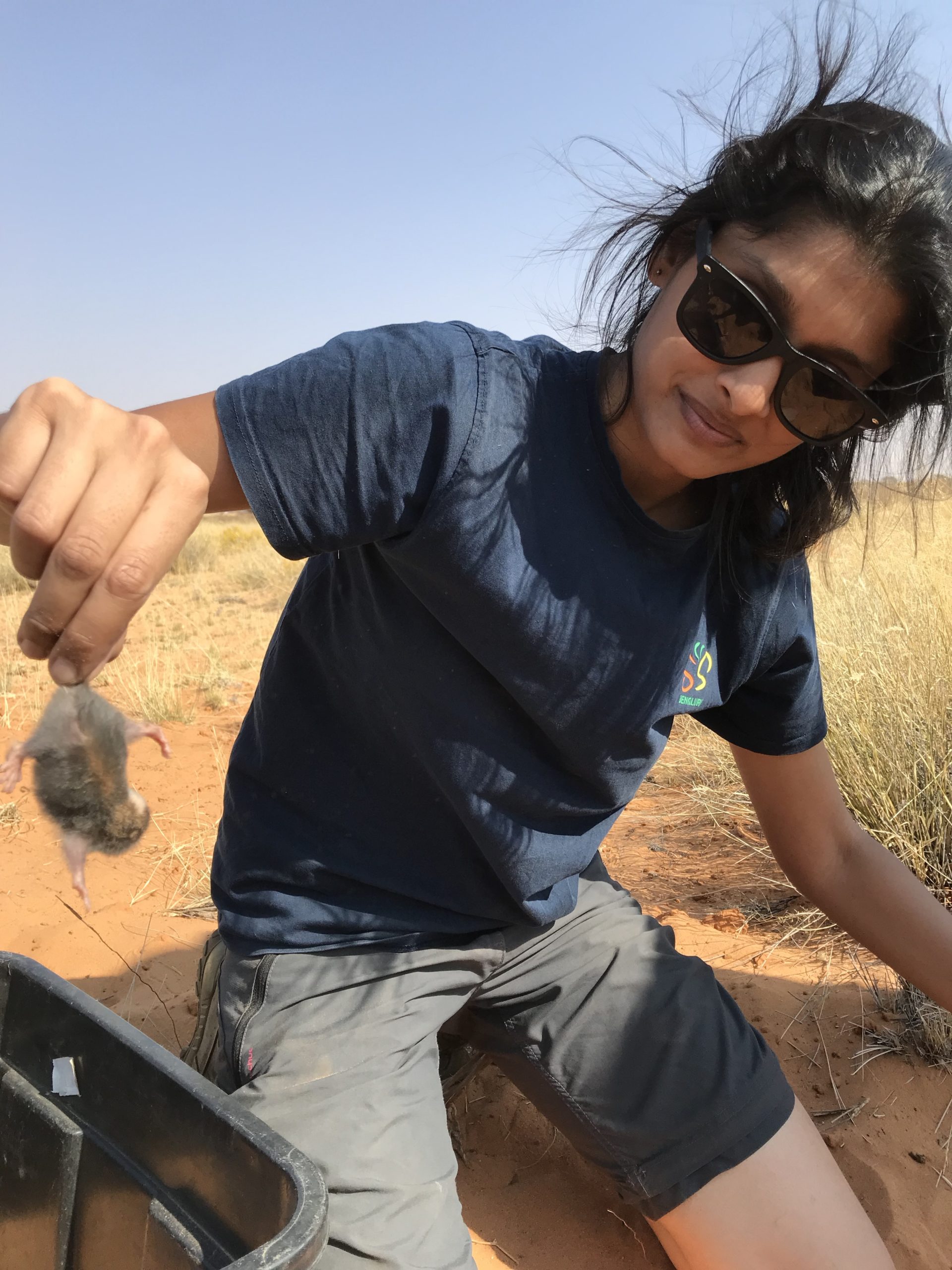 “I was driving back to the basecamp after fieldwork and stopped for a herd of Oryx to cross the road safely. While I was waiting for them to pass and just enjoying seeing this large herd of about 15, I spotted something from the corner of my eye, and lo and behold it was the Secretarybird! I was over the moon, and stayed in the car watching this strange yet gorgeous bird till it was out of sight. Needless to say, it made my day. I was lucky enough to have another sighting of the bird, and this time a large incoming storm made for a magical background; I failed to get a good photograph both times though!”

My earliest recollection of trying to identify and name a bird was probably back from when I was 8 or 9 years old. I did not know the names of birds other than that of the ones commonly seen in cities, but I liked coming up with names for those “other” unusual birds I saw. An example of this is when I would call the Greater Racket-tailed Drongo that would regularly perch on a Singapore Cherry tree in my uncle’s front yard a “Two-tailed Magpie”. It is safe to say I didn’t turn into a professional bird namer! But it is also this child-like urge to find something new that drives a lot of us to stay in this field.

Something from quite recently was when I was working in the Kalahari Desert in South Africa. The reserve I was working in was not too large and had only a few reports of the Secretarybird. And this was a bird that I was obsessed with seeing. I have watched it on a few shows on TV while growing up and though some may argue that it looks like a gigantic chicken, it is a beautiful gigantic chicken that I was determined to see! I was driving back to the basecamp from the field and stopped for a herd of Oryx to cross the road safely. While I was waiting for them to pass and just enjoying seeing this large herd of about 15, I spotted something from the corner of my eye, and lo and behold it was the Secretarybird! I was over the moon and stayed in the car watching this strange yet gorgeous bird till it was out of sight. Needless to say, it made my day. I was lucky enough to have another sighting of the bird, and this time a large incoming storm made for a magical background; I failed to get a good photograph both times though!

A herd of Gemsbok throwing curious glances at me as they decide when to run away (left) and a Secretary bird in the Kuruman River Reserve, South Africa (right)

This is how my love for birds and research took shape..
My grandparents lived at the edge of a reserve forest in the Western Ghats and I would spend my summers there growing up. Here, my cousins and I would spend most of our day being out in the farm and the adjoining forest, which made me very accustomed to the forest and everything that came with it. My parents too would take me on hikes in the forests of the Western Ghats and I was hence used to spending time in nature and observing things around me. I was particularly interested in birds and have since found them fascinating.

I was initially interested in biotechnology and pursued that subject for my Bachelor’s along with Zoology and Chemistry. However, during this time, I realised that I was more interested in understanding processes that occur naturally than those that man has learnt to modify. An eco-club that I was a part of during my Bachelor’s also helped me steer towards ecology. I therefore went ahead and pursued Master’s in Ecology and Environmental Sciences from Pondicherry University and graduated in the year 2014. I was then fortunate enough to have worked on some very interesting projects on avian biology at the start of my career. My Master’s dissertation was on the nesting ecology of the Critically Endangered Forest Owlet; an interesting bird that was rediscovered in 1997 after a hiatus of 113 years. It was my first real glimpse into everything that goes on behind a study before the data and its results become presentable.

A Forest Owlet in the forests of Madhya Pradesh, photographed during my Master’s dissertation project

I then worked at the Centre for Ecological Sciences (CES), at Indian Institute of Science (IISc) on an avian malaria project, which was the first of its kind in India. This project taught me mist-netting skills, which I still hope to actively pursue someday in my career. We collected data by mist-netting birds across remote places in the western Himalaya and then carried out molecular lab work to assess the extent of avian malaria in the sampled population. This work taught me how to persevere and push myself beyond the preconceived limits in my head.

A Green-tailed sunbird that was mist-netted while sampling in Uttarakhand, India

Following this, I was very keen on wanting to carry out an independent project on birds along with an angle of conservation to it. Keeping this in mind, I co-developed a study on the Critically Endangered White-bellied Heron and the Endangered White-winged Duck, both of which are found in the eastern Himalaya in India. We managed to raise three grants for the study, and during the course of this project, I was associated with the Nature Conservation Foundation. The fieldwork for this project was one of the most exciting times of my life. We travelled along the beautiful rivers and the not-so-beautiful roads of Arunachal Pradesh on a motorbike while looking for the White-bellied Heron. We sampled stretches of river across the length and breadth of this state searching for this rare bird and visited parts of this gorgeous state that I consider lucky to have been to. It was an exhilarating time and I have never had more gratitude for the kind strangers who welcome you into their house and treat you like their own blood. We unfortunately could not find new locations for White-bellied Heron but I like to think that we at least started a conversation about the dire straits of this bird. Moreover, we came across new locations for the Vulnerable Black-necked Crane, the Endangered Black-bellied Tern, and the Common Starling. We have also reported sightings of the Asian small-clawed otter.

We recorded the easternmost location in India for the Common Starling, which was seen in Anini, Upper Dibang Valley, Arunachal Pradesh

I am currently juggling between Bangalore and the Netherlands and consulting for an organisation called GroundUp Conservation who do very exciting work in different landscapes around the country and are also helping restore wetlands in Koshi-Tappu, Nepal.

I love what I do because
I love fieldwork and with it the chance to visit various places and habitats. One really learns to push themselves when out there in the field and carry out problem-solving on the spot. No two days are the same and you never know what you will find out there. Everyone dreams of making new discoveries and few succeed in it, but at some point, you begin to observe mechanisms that are being carried out day-in and day-out in nature, which we may never stop to appreciate otherwise. I truly believe that fieldwork humbles you. You learn to live with the most basic of necessities and the evenings are not spent peering at phones but rather by having lovely conversations over some piping-hot tea.

The challenges I faced..
Though nothing life-altering, some of the challenges I’ve faced during my work happen to be related to bureaucracy and some casual and not-so-casual sexism. Some aspects of starting a project from scratch such as obtaining permits, talking to officers in the Government, and arranging things so everything flows smoothly (which is a rarity) takes a lot of patience. I have had to stand up for myself when some people ignore your words because you are a woman, but this has only made me stronger.

My advice to young researchers is..
Research prepares you for possible pitfalls both on and off-field but it takes time to learn to live with them. Not everything will go as per plan; you may not see that one species you want to see; it may rain when you have your equipment out and will have to watch your datasheet get wet; your paper may get rejected by a journal though you may think it is unfair. It may not always be nice but if you still enjoy doing what you do and think that the pros outweigh the cons, then this field is for you.

Megha! It’s amazing to read your story. I am so proud of you and you should be too. You’re such great example for the aspiring newbies out there. You deserve a hug right now. Keep thriving!

A fascinating story which inspires. I can relate to you as my daughter has similar story – she used to name bulbuls as “hair-styled bird” in her early days of birdwatching 🙂

Thank you, sir. That is such a sweet anecdote 🙂

Your field experience provides valuable inputs for an aspiring birder. By sharing your story you certainly inspire young minds, All the best.