"After a while, I could see that one after another, the whole group was falling into the net. The 15 meters long mist-net was full of Babblers and it was giving us thrill and excitement. There were around 12 babblers in a single net out of which 4 were recaptures and all were making whining calls. The cacophony of calls was so loud that it would almost puncture my eardrum."

It was a sweltering summer month in Mohali. As usual, my colleague (Yambem Soniya Devi) and I opened  mist-nets and were waiting with not so much excitement. It had been a week since we got any Jungle Babblers in the mist-net and often ended up folding them up with zero captures and it was so demotivating. As we do mist-netting on campus, Dr Manjari Jain (our supervisor) used to visit us at the field site every day. She kept encouraging us and used to say “it’s ok, we have already tagged these many babblers and it is not a bad sample size. Just keep doing it and we will get more”. We even asked our field assistant to not come to the mist-netting site as we were not expecting any captures. It was already 2 hours since we opened the mist-net and there was no sign of any babbler. Suddenly, I saw a group of babblers wandering around the mist-net. With some hope, I told my colleague that we are definitely going to get a babbler in the net today. After a while, I could see that one after another, the whole group was falling into the net. The 15 meters long mist-net was full of Babblers and it was giving us thrill and excitement. There were around 12 babblers in a single net, out of which 4 were recaptures and all were making whining calls. The cacophony of calls was so loud that it almost punctured my eardrum. The more they  called, the more I was getting stressed. Since it is a residential campus and the sampling site was not in a secluded area, people passing by were giving us odd looks as if we were butchering those poor birds. On the other hand, the calls caught the attention of feral dogs and they were ready to attack.  My colleague shooed away those uninvited guests and I called a junior from the lab to assist us. We extracted all captures one by one and within an hour, we tagged and sampled 8 new birds. It was only after we released the last babbler, I remembered that Dr Manjari was waiting for new captures, but I was so busy tagging these birds that I forgot to call her. I sent her pictures of newly banded babblers and she was also excited and happy. We wrapped the mist-nets and that was when I noticed that we were soaked in sweat and had mosquito bites everywhere. I still remember that day as pay-off day.

A colleague while extracting a bird from the  mist-net.

This is how my love for birds and research took shape..
My relationship with birds is very recent. I am from a small village in Ladakh. I never got exposure to ecology or ornithology as such. From the bunch of subjects I studied in college, Animal Behavior interested me the most. I was sure that I wanted to opt for Animal Behavior as my research career. When I joined IISER Mohali as a PhD fellow, I got a brief period of time to explore the avian world and I started enjoying it. I still remember how mesmerized I was by the beautiful coloration of the Coppersmith Barbet. I never expected such beauty behind the monotonous beeping sound. Contrarily, when I saw a sunbird for the first time, I was astonished by its vocalization.  The curiosity bug inside me wanted to know more about this fascinating animal taxon. And when my supervisor asked me if I wanted to work on birds or crickets, it didn’t take me more than a second to answer ‘birds!’

I work on avian vocalization. Avian vocalizations are categorized as songs or calls. Variation in structure does not change the function of songs but different calls serve different functions. Among all vocalizing animals, human languages are considered the most complex. On the other hand, not much is known about the level of complexity in avian vocalization. For my PhD dissertation, I worked on calls of the Jungle Babbler, determining the complexity in its vocalization on the basis of structure and function. Babblers are dull-looking, noisy, yet interesting Passerines, which live in social groups and breed cooperatively. They are common backyard birds often found chattering and hopping around. I followed and conducted my research in institute campuses and in public parks of Mohali. 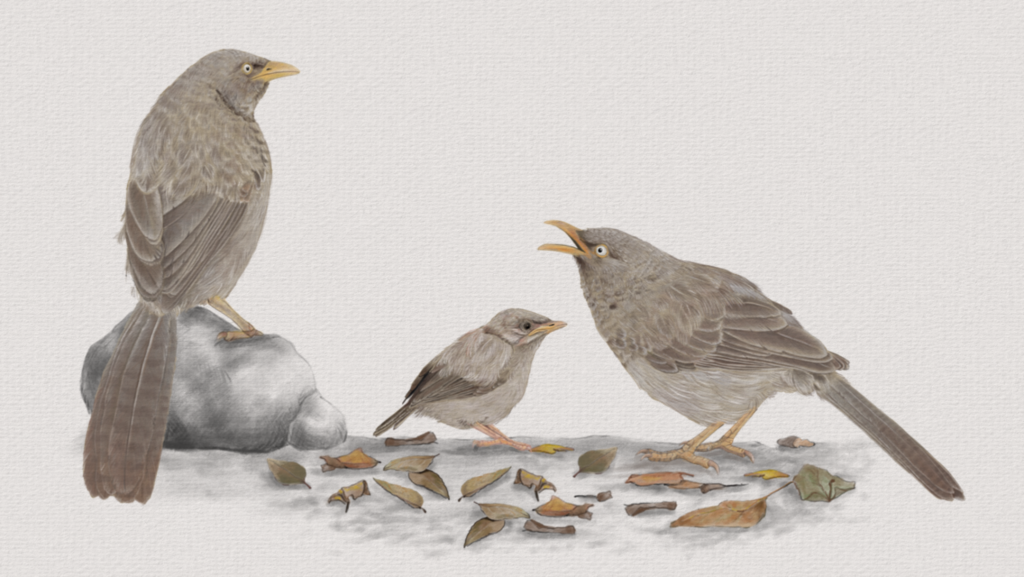 I love what I do because..
Human languages are considered as highly developed vocalizations. But not many studies have actually investigated how complex avian vocalization is, even though Oscines (the main group of songbirds) are known for their vocalizations. I am glad that I was able to contribute to this unexplored topic. It gives me a sense of satisfaction that I could address questions which I set out to explore. Currently, I am in the process of thesis submission and I now realize that seeing a bird or hearing their songs and calls gives me immense pleasure. Working on an avian project was like living my hidden hobbies and all the hardships I faced had faded away. In addition, since institute campus was my field site, I enjoyed balanced field and lab work on a daily basis along with the perks of city life.

Challenges I faced…
I grew up in the cold climate of Ladakh, and when I joined IISER Mohali, I was very excited to work on birds but I was naïve and had no experience in field biology. I had never worked on birds and acoustics before. In addition, my colleague and I were first to start an avian project at IISER Mohali. So, working on a project to set up the foundation was very challenging. I had to face various logistic problems right from buying appropriate instruments to applying for permits. Tackling all these problems without prior experience was both tedious and taxing. I had to learn everything from scratch based on trial and error starting from how to use various acoustic based hardware and software. Conducting field-based research in the scorching hot summers of Mohali was also challenging for me. Moreover, my study was based on detailed acoustic characterization of babblers which included recording babbler vocalizations from their natural environment. But, getting a clear recording from wild habitat was very hard as babblers live in a group and most of the time they vocalize together. In addition, it’s not only the babblers  which vocalize, so most often I ended up throwing all the recordings I had collected. My research also included playback experiments which required permission from various departments and the process took nearly two years of my PhD.

My advice to young researchers….
A common misconception among people is that you have to work in national parks or inaccessible places to conduct research on birds. However, a plethora of bird species are in our backyards, public parks and even in the treelines around the roads. So, you can be an ornithologist while living in a city. A pair of binoculars and your ears will bring all the joy of feathered bipeds around you. In addition, a bit of curiosity and thinking is all you need to conduct research in ornithology. What really matters is how you are framing your research questions and how you are implementing it. Also, you need a lot of patience, it is quite possible that after days and years of fieldwork, you may not be able to answer your research questions. So design your research question smartly, working hard alone doesn’t always pay off. Besides, research (PhD) is a learning process, it is not mandatory to know everything before you step into research. Finally, it is of utmost importance that you are not disturbing these animals just for the sake of your work.

Wonderful News for Ladakh. Kudos to Ms. Sonam Chorol for taking interest in Animal Behavior and going for PhD.

Ladakh needs such young researchers in the field and there are not many, especially from Leh, doing research in Birds.

Ladakh Birds Club will be more than happy to host Ms Sonam Chorol for a Talk for youths and our members.

Over the years, Ladakh Birds Club managed to add more than 30+ species to the existing Checklist of Birds of Ladakh (published).

A book on Birds of Ladakh titled ” A comprehensive account of BIRDS OF LADAKH – commentary, notes and field guide” should be great help to young researchers in particular and birders in general.

WCBCL local Ladakhi members have contributed all the datas and photos for the book.